I recently published a post that focused on the hip abductors and adductors and how they can be used to stabilize the pelvis and synergize flexing the hips in forward bends. In this post, we’ll look at a technique that can be learned with Chaturanga Dandasana (Four-Limbed Staff Pose) and then transported to other poses to improve benefits and safety. I call this technique “ease in, ease out,” and it relates to how one approaches the endpoint of a pose.

For this cue, I take a yoga block and place it at the level of my sternum, then lower down to lightly touch it from Phalakasana (Plank Pose). I then straighten my arms to return to Plank. The image that bodyweight practitioners use for this is “kissing the baby” because one touches the block as gently as kissing a baby on the forehead. Working in this manner teaches muscle control and sensitivity.

Those who avoid full Chaturanga Dandasana due to weakness of the muscles involved can develop the strength for the full pose by starting at a wall, as shown in figure 2. Here, instead of the chest touching the block, bend the arms to lower toward the wall and gently touch the forehead, hold for a moment, and then straighten the arms. Work in this manner until you can comfortably do ten repetitions. As strength builds, transition to Plank with the knees on the mat, lowering down to touch the block as in the final version. (Figure 3)

Visualizing the muscles involved is a powerful adjunct to this technique. Use a mental image of the triceps, pectoralis major and serratus anterior muscles engaging in stabilizing the arms, shoulders, and chest, as shown in figure 4. The triceps straighten the elbows and is a secondary stabilizer of the shoulder joint. The pectoralis major draws the upper arm toward the midline (adduction) and helps to expand the chest (when the shoulders are held in place). The serratus anterior extends from the upper nine ribs to the inner (anterior) medial surface of the scapula. It acts in concert with the rhomboids to stabilize the shoulder blades and thus prevent “winging” of the scapula in this pose. (Figure 4 below)

Slowing the movement as one approaches the endpoint of the pose also sets up a cadence or rhythm, especially when working with a vinyasa flow-based practice. It can be applied to any pose and also to inhalation and exhalation, thus smoothing the breath. It also aids in protecting the joints, which have smooth curved surfaces that adapt best to gradual transitions during movement.

Reprinted with permission from the Daily Bandha. 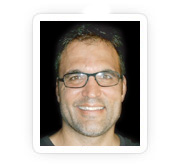 Author, Ray Long MD FRCSC is a board-certified orthopedic surgeon and the founder of Bandha Yoga. Ray graduated from The University of Michigan Medical School with post-graduate training at Cornell University, McGill University, The University of Montreal, and Florida Orthopedic Institute. He has studied hatha yoga for over twenty years, training extensively with B.K.S. Iyengar and other leading yoga masters.

3d Graphic Designer / Illustrator Chris Macivor has been involved in the field of digital content creation for well over ten years. He is a graduate of Etobicoke School of the Arts, Sheridan College and Seneca College. Chris considers himself to be equally artistic and technical in nature. As such, his work has spanned many genres, from film and television to videogames and underwater imagery.

Yoga For Back Pain: Keys to Preventing and Healing Sacroiliac Instability
While millions of Americans suffer from pain in the low back and pelvis, many back and hip issues are actually the result of sacroiliac instability (SI), i.e. an imbalance in the sacroiliac joint, which often goes undiagnosed or is improperly treated. Alarmingly, yoga practitioners appear to... END_OF_DOCUMENT_TOKEN_TO_BE_REPLACED

Doug Keller: Essentials of Safe Hip Opening
Hip openers are among the most satisfying and powerful yoga poses. They hold a tremendous potential for transformation; they can help us release deep-seated tension and trauma of the past, which many of us hold locked in the hip area. When practiced correctly, hip openers are a great way to soothe... END_OF_DOCUMENT_TOKEN_TO_BE_REPLACED

Yoga for the Pelvic Floor: Keys to Lifelong Health
Most people know the importance of core strengthening for health and long-term well-being, but the pelvic floor is an important group of core muscles, which tend to get ignored. “The torso is like a tote bag for your organs,” says Leslie Howard, a Bay area yoga teacher who conducts workshops... END_OF_DOCUMENT_TOKEN_TO_BE_REPLACED

“Don’t take anything personally. Nothing others do is because of you. What others say and do is a projection of their own reality, their own dream. When you are immune to the opinions and actions of others,... Read more

Yoga Research: How to Identify Sound Studies on Yoga and Meditation

There’s a stream of new research emerging about yoga and mindfulness, and even more popular news and social media posts about the health effects of mind-body practices. This research asks important questions,... Read more

Have you been in yoga class, plopped into Kapotasana (Pigeon Pose), and been told to flex your foot “to protect the knee?” When I first began practicing yoga, like a dutiful yogini, I followed my teacher’s... Read more

Several months ago I got in a habit of going for a short walk in the morning to clear my mind and get myself ready for the day. Those 15 minutes turned out to be crucial in getting my day off to a good start,... Read more

Quarantine Blues: How to Make Home Yoga Practice Your Sanctuary